Looking Beyond the Challenges of 2021
by Susie Slanina 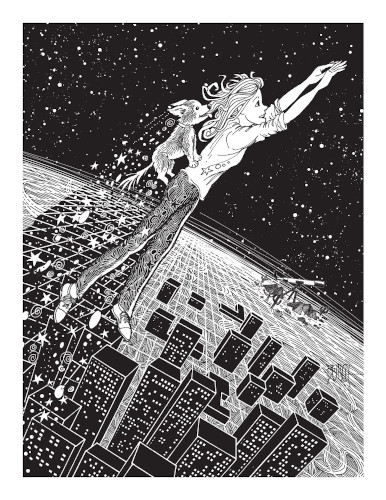 “I’m not afraid to die, I’m just afraid of taking that last breath.” Those were my brave mother’s words before going to the hospital. I’ve thought about my mother and these words often during the last two pandemic years. She was diagnosed with lung cancer in September 1993 and died in January 1994.

When our way of life became so weird and surreal, sometime around March 2020, I started taking long, slow breaths. I felt a mix of gratitude for each breath, honor for my mother, and sympathy to the many people who were struggling to breathe. I added one breath per week and got up to 52 breaths–a whole year. Then it seemed the pandemic was easing. I stopped dwelling on it so much, started going to restaurants and laughing again. Being back in a restaurant felt awesome; we made a toast: “Wow, we’re actually in a restaurant!” Just being able to do what we used to consider normal, everyday things became a grand celebration. Unfortunately, the virus returned, and just as that wave seemed to be waning, it’s now back with a vengeance.

During the worst of it, I coped by getting coffee and driving to a deserted high school parking lot. I nicknamed it Crown Point and sometimes I’d meet friends there for safe “car chats.” But mostly I was by myself.

The north side has a view of Mount St. Helen’s. I’d stare at the mountain and think. I’d take my pups, Sugar and Curry, for a walk, and then I drove to the south side of the school. My friend, Jadia, has a dove release business. I’d watch her doves fly, swirl, and swoop. I love watching birds, and Jadia’s doves put on quite a show. When the school reopened, I lost my thinking spot, and jokingly told friends maybe I could volunteer to be a monitor or something so I could still park there and enjoy views of Mount St Helen’s and the doves. 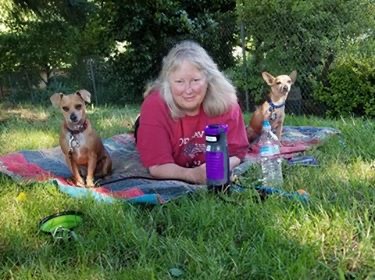 I’d also take the pups to the local dog park, which was miraculously still open, though pretty deserted. It was eerie, the nearby playground empty, and the normal sound of traffic non-existent. I met my friend, Diane, and we walked around the park, and kept socially distant. On the internet, I saw a picture of a lady in a wide hoop skirt and wryly thought hoop skirts would be the perfect attire for the dog park. Wearing them, everyone would be separated safely. Our little play group was on again, off again, and I was grateful Sugar and Curry could meet up with their friends in the small dog area.

Weather in the Pacific Northwest has been strange, too. We had a brutal heatwave for three days last summer, reaching a high of 116 degrees. The year before, we had the most hazardous air quality in the world due to raging wildfires. That was worse than the heat wave. I’d walk the dogs for 10 minutes only. I tried throwing the ball just a little distance for Sugar, but after fetching a few times, he was on to me. Instead of fetching, he grabbed the ball and ran and ran. That put an end to the game. Sorry, Sugar, game over. No way I’d let him run in that air, I worried for his tiny lungs. As I write this, in late December 2021, we are experiencing an unusual cold snap, and the arctic air is bitter with overnight windchill hitting the teens.

But here comes a whole new year! It’s tantalizing to think of how much better it might be.  Hopefully, 2022 will see us through to the other side of this terrible, historic pandemic.

I’m looking forward to the new James Webb telescope–I think the images are going to be mind-blowing. (Thank you, Hubble.)

For the last three years I’ve been whining to friends: “I want to write more Metro books, I want to write more Metro books.” But, have I lifted pen to paper? Uh, well, no. I kept stalling and stalling, facing the blank sheet, and leaving it blank. But yesterday, I finally did pick up a pen and actually started to write! And, yes, that’s the way I start each Metro book–pen and paper. (I really am a technophobe. I’ve never had a cell phone and when someone hands me one, I’m lost. Speaking of lost, that’s exactly where my cell phone would be within a week: LOST. Admittedly, I’m a scatterbrain.)

But dogs can keep me somewhat centered. We used to play a little game when I lived in Big Bear. We called it Doggy Appreciation day. It’s described in the book, Metro Duets:

It’s a very simple game to play. One at a time each dog gets to sit on a lap and be petted. This dog gets all the loving attention. The dogs adored hearing all the kind words, and the girls loved to watch as the dogs blossomed like roses under showers of appreciation.

Ahh, dogs. Concentrating on them can quiet the mind.

And the best part about writing is going on flights of fancy with my heart dog, Metro. When I write, I imagine the sweet little muse sitting on my shoulder and giving me ideas. Metro’s been quiet the last few years, but lately I’ve felt her sweet presence and flickers of imagination starting to spark. Oh, hi, Blank Page. Metro’s here, and you won’t be blank for long.

The other thing I’m looking forward to is Grounding more outside, when the cold snap breaks. Grounding (or Earthing) is the simple practice of placing your bare feet (or any part of you) on the ground. You are connecting to the earth. Peer reviewed studies have shown many health benefits. There’s a lot of skepticism about this, but all I can say is, it works for me.

Grounding is a fascinating subject. When I get into something, I get obsessed. Just ask anyone who knew me when I had Metro. Now I always want to talk about Grounding and some people’s eyes glaze over. I started Grounding last April after I watched THE EARTHING MOVIE. I went outside and laid on the grass for two hours. I had my dogs nearby on leashes. My favorite thing is to watch my dogs anyway, so it was super cool just to gaze in their eyes for those two hours. They seemed content. I went into the house and seriously, I felt “spacey.” Not the normal definition of spacey–it just felt like there was actually more space in my head. My brain wasn’t cluttered with the myriad of topics that run amok constantly as any good scatterbrain will tell you. For a while, I felt peace.

I did it the next day, and the day after that. Everyday I felt this wonderful calmness. Then I noticed other things, both big and small, healthwise. My doctor confirmed better numbers. My partner, Alan, has experienced benefits, as have several friends. It’s something I honestly believe in.

I read the Earthing book, and found lots of people have had great success. And whether Grounding works or not, it’s a wonderful feeling to be outdoors, intentionally connected to nature in this simple way. In fact, it’s the one health program I’ve been consistent with: going outside and doing nothing! 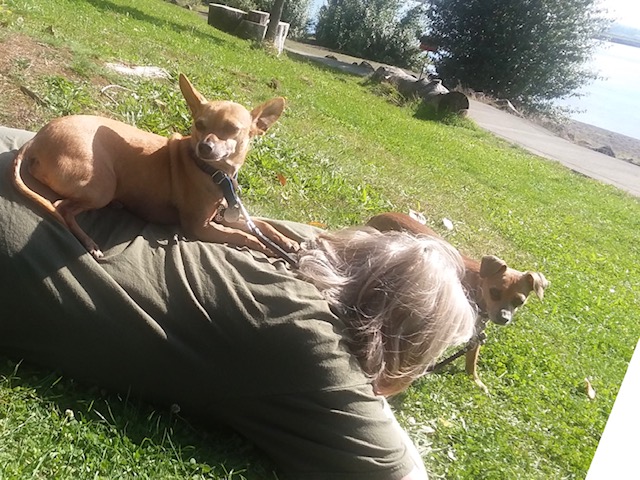 Sugar and Curry love it, too. In the summer after a walk with a friend, we take our shoes off and sit under a shady tree. The dogs get it: Grounding Time! They plop right down beside us and seem calm and happy, too. I’m still learning a lot, and I found even pets benefit from this practice! Definitely a win-win situation.

After a few weeks of feeling better both physically and mentally, I thought about my dog, Shweetie. A few years ago, she was running through a field and sprained her back leg. The vet recommended a period of complete rest. But, she kept getting up and limping to the back yard. She dug a hole and wanted to lie there. I kept coaxing her back into the house and on to her “comfortable” doggy bed. She reluctantly obeyed me. But now I think she was trying to heal with the help of the earth. Her leg eventually got better, but I wonder if she would have healed more quickly and with less pain if I had let her rest in the hole. Oh, Shweetie, you were so wise!

Thinking back, I used to Ground a lot, before I even knew what it was. I used to sit on the grass with Metro and rub fragrant orange blossoms on her velvety tummy. She seemed to like it and now I know one of the reasons: She was grounded! And so was I, because I recently learned that when you touch your pets when they’re outside, you become grounded, too!

Since I made the decision to write again, I’ve looked over the four published books. The illustrations by Paul Bunch are sublime. I hesitate, but I really hope to continue the series in 2022. I’m grateful to be a member of two wonderful, supportive groups, Windtree Press and Northwest Independent Writers Association. I never knew any authors before writing the books and now I know many. I miss doing events with them. They’re so interesting, and they all have stories to tell! My friends have also been encouraging me (for years now). I miss speaking at local schools, the kids were always welcoming and considerate.

It’s been a strange time, but it feels good to finally take pen to paper again. It’s fun to daydream about the very good dog, Metro, and discuss different ideas and titles for the next book. My friend, Sheila, came up with a fantastic topic and title. Her suggestion: METRO GOES GROUNDING. 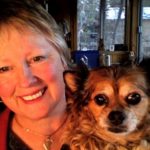