As a young girl, I dreamed of getting married and becoming a mother. I grew up with three siblings, a sister and two brothers, but for my future family I simply wanted one of each, a boy, and a girl, oh, and of course the obligatory pets, a dog, and a cat. And to complete my fantasy, I longed for a house, yard, and white picket fence.

My girlhood illusion morphed into a difficult reality when I found myself divorced after six years of marriage, raising two boys on my own. Fortunately, my mother, Rita, had provided a good role model since she too had navigated her own single motherhood journey when my sister and I were toddlers. Like my mother, I eventually remarried, gaining a step-son in the process.

As a child, we are unaware of the sacrifices our mothers make for us. Working two jobs to make ends meet. Skipping meals to ensure their kids have enough to eat. Championing their children’s accomplishments and understanding their failures.

I don’t personally know any mothers who would seek vengeance for harm done to their child, but I know when my son Derrick died due to lack of care by an ER doctor, I had an overwhelming desire for revenge.

Interestingly, before Derrick’s death, I had written Peril in Paradise, showcasing Clara’s struggle between seeking justice or revenge for Ally. And while I’m fairly certain I can’t take someone else’s life; I was surprised to see Clara captured the emotions I went through after my son’s death. Also, Clara endured the humiliation of becoming pregnant by her college boyfriend and choosing to have the child on her own. My mother experienced the same humiliation in high school, and if not for her self-sacrifice, I wouldn’t exist. In creating Clara, I unknowingly shared my experience in losing a child, but I did intentionally weave in my mother’s bravery during a time when unwedded mothers were scorned.

In Malice in Mazatlan (coming 10/22) Katelyn’s mom, along with Stella’s mom, go on Katelyn’s honeymoon after her wedding is cancelled. The two single moms enjoy the Cayman Islands while Katelyn licks her wounds in Mazatlan. I’m sure there are mother’s who would have rushed to support their daughter during her time of crisis, but I love knowing that my mom would have asked the question: “Who’s going on your vacation?” My mother knew I was more than capable in finding solace so I gave this strength to Katelyn, and I know my mom would’ve hated for Stewart to be able to enjoy the Caymans and would have volunteered in a heartbeat to enjoy the non-honeymoon.

Since my preferred genre is suspense, I haven’t found an enduring role for the moms in my books yet, but always try to mention moms and add a little antidote describing how they play a role in my characters’ lives.

Harley Harper’s mom in Redneck Ranch (coming 7/23) is at first appalled at her daughter’s decision to leave her fabulous life in New York city, after being stood up at the altar, for a new life that includes a cast of unruly animals and a handsome sheriff. But once Lilith sees how happy her daughter is and begins to understand Harley’s need for the healing power of her animals and wide open space, Lilith curbs her criticism. I think all mothers have a critical side, whether it’s sharing their disapproval of an outfit or a hairstyle, a career path or lack of ambition. Their choice of a husband or perpetual singledom. Despite my mom’s criticism, I always knew she loved me.

My mom, aka my biggest fan, encouraged me through every word of my writing journey. When I won an award, she’d be the first person to congratulate me and spread the news. And with every rejection letter, Rita offered support and understanding, always reminding me “obstacles are placed in our lives, so we work harder and appreciate our accomplishments even more.”

All mothers’ are unique, including myself. As the mother of boys, you learn to bandage injuries without offering too much comfort. I’m happy to say my surviving sons, Norman and Sean have become wonderful men. And as luck would have it, I recently developed a mother-like relationship with a single mother raising three teenagers on her own. Daughters are definitely different than sons and I feel blessed to have new insight to help me create strong mother/daughter relationships in my books. 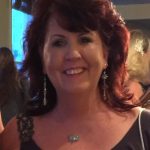